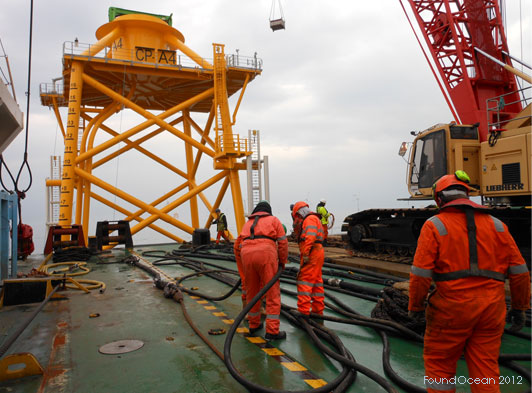 Thornton Bank Offshore Wind Farm has a total capacity of 326MW and is installed 30 km off the Belgian coast. The turbine foundations sit in water depths ranging from 12 to 27 metres.

The 49 four-legged OWEC Quattropod® foundations were designed by OWEC Tower and were secured to the seabed by grouting the annuli between the stab-in legs and pre-driven piles.

Each leg was equipped with a primary and secondary grout line terminating on the mid-section deck for ease of access, and connection of the grout hose. A tertiary grout line was provided as a backup connection in the event that contingency grouting was necessary. This was fitted with a FoundOcean ROV male subsea grout connector terminating above the pile stopper.

3,826t of cement was used during the course of the project, and approximately 3,000 grout cubes, each weighing 850g, were manufactured to carry out characteristic strength tests at 24 hours, 3 days and 28 days.