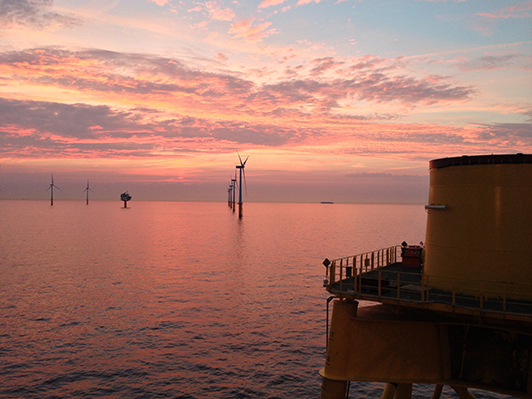 FoundOcean secured the foundation for the 6MW offshore turbine at the 165MW Belwind ll wind project, 45km off the Belgian coast. The large-scale turbine is housed on a 900 tonne four-legged jacket, stands at a height of 100m and has a rotor diameter of 150m.

The steel jacket structure was secured using a tried-and-tested method via jacket leg pins inserted into pre-driven piles. A pan mixer was used to mix and pump Masterflow® 9500 Exagrout which was drawn off from the mixer by a pump. The grout was then pumped down a flexible high pressure grout hose into the annuli via the primary inlet. Grouting continued until good quality grout returns were observed overflowing from the top of the pile.

While attempting to grout two of the annuli, pressure in the grout lines was observed as being too high, resulting in grouting operations being stopped. To commence grouting a stinger was deployed to each annulus and inserted directly into each pile. Grout mixing and pumping then resumed until good quality grout returns were observed.

A total of 237 tonnes of Masterflow® 9500 Exagrout was used in the foundation connections.