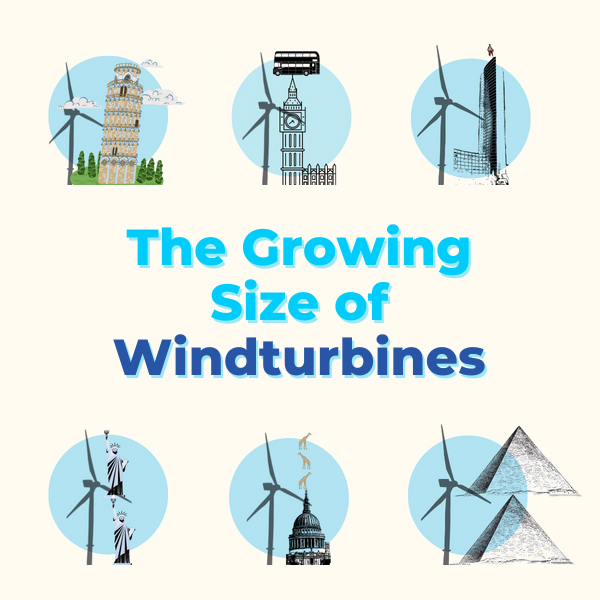 The Growing Size of Wind Turbines

The first offshore wind farm, Vindeby Wind Farm, was installed off the coast of Denmark in 1991. This landmark occasion for the renewable energy sector marked the beginning of a huge surge in innovation and new technology. Those initial turbine designs have been developed into hugely impressive works of engineering today – a single turbine is now able to provide green energy to thousands of homes. At maximum capacity, an 8MW turbine produces enough energy to power up to 16,000 homes here in the UK.

One major development in the design of offshore wind turbines is their sheer size. They have grown taller, and their blades have grown longer. In the United States, for instance, the average hub height (the distance from the base to the rotor) for offshore turbines is expected to increase from 100 meters in 2016 to around 150 meters in 2035 – nearly the same height as the Washington Monument!

Their growing size allows turbines to harness significantly more power. Tall turbines reach higher altitudes where the wind velocity is several times higher than ground level. Longer blades create a large rotor diameter and allow the turbines to sweep a larger area, which creates more electricity. These developments have led the Global Wind Energy Council to record a 72% increase in average rated capacity between 2009 and 2019. This is a huge development in green technology.

Wind turbines at the Middelgrunden site (at the time, the largest offshore wind farm in the world, off the coast of Copenhagen, Denmark) reached heights of 110m

FoundOcean is in awe of some of the fantastic structures we get to support and are proud to play our part in the booming offshore wind sector.