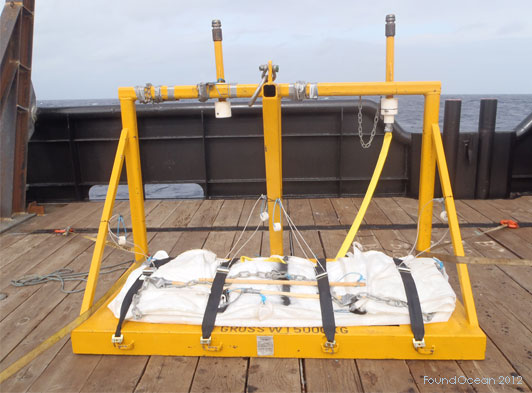 Our Sales Director, Andy Venn, talks about one of FoundOcean’s repair projects when we were called in to help mend a damaged pipeline in the Gulf of Mexico.

Oil pipelines and the Gulf of Mexico

In recent months, the Gulf of Mexico has hit the news and social media, after a pipeline leak near the Mexico coast caused the sea to appear to be on fire. On 2nd July 2021, an undersea gas pipeline ruptured, and images that went viral on social media show huge flames next to minuscule-looking firefighting boats that were blasting water cannons in an attempt to quell the blaze.

This isn’t the first time that this region has been in the news due to its oil and gas infrastructure. The explosion of the Deepwater Horizon oil rig in 2010 caused the tragic deaths of 11 rig workers as well as the largest accidental ocean spill of all time, leaking over 130 million gallons of oil into the ocean.

And, very recently, Hurricane Ida has been in the headlines.  Hurricanes can cause what is called ‘hurricane-induced bottom stress’, exerting huge force at great depths along the ocean floor, causing pipelines to move around and increasing the chances of damage. Divers are currently searching [September 2021] for the source of an oil spill; once identified, agencies will work on a recovery control plan to mitigate further environmental impact.

The importance of repairing and maintaining pipelines

Disasters like these show how important it is to maintain the infrastructure of offshore oil and gas installations and to make sure repairs are completed promptly and efficiently, in order to make the offshore environment safer for the people who work there and hopefully prevent further tragedies.

It is also vitally important to consider the environment. Following the Deepwater Horizon oil spill, ill-health conditions and strandings were reported among pelicans, dolphins, and sea turtles in the area, and the environmental impact is still being felt. This emphasises the need for any repairs to oil and gas infrastructure to be executed in a manner that causes minimal disruption to the natural surroundings, and also be performed promptly in order to prevent or minimise any leaks.

In 2011, FoundOcean performed repairs on an 18-inch gas pipeline in the Gulf of Mexico, operated by Williams. The damage had been caused by an anchor from a vessel being dragged along the seabed during bad weather.  As a result, the pipeline was recalibrated to run at reduced pressure in order to keep it functioning safely. This continued until the remedial work could take place.

The pipeline was situated 750 metres under the sea. For scale, that’s over twice the height of the Shard in London or the Eiffel Tower in Paris. The seabed under the pipeline first had to be dredged to allow the repairs to take place, so our expertise in working at depth was key in executing this project effectively.

The first stage of the fix was installing a 138-inch repair clamp. A remotely operated vehicle (ROV) lowered the grout hose from the surface to the pipeline and attached it to the clamp’s connector. FoundOcean are leading grout specialists and mixed a grout that was most suitable for the work at hand – in this case, ASTM TYPE I/II at a specification of 50 MPa. Our high shear colloidal batch mixer was used to mix the grout, which produced cement slurries of high density and consistency. The grout was then pumped down through the grout hose to fill the clamp’s annulus.

The second stage of repair required us to support the additional weight of the grout and clamp. A fabric formwork was used to provide support to the pipeline, along with the additional grout and clamp, to ensure that they were securely positioned. We used a deployment frame, designed for transporting, installing and filling grout bags, in order to position the grout bag underneath the pipeline. The ROV was then used to connect the grout hose to the connector on the frame. Finally, grout was pumped into the bag to support the repaired pipeline. The total amount of cement used came to 24 tonnes.

Pipeline maintenance is important to protect the surrounding environment. In the Gulf of Mexico, past disasters have had a devastating effect, so it is especially key that maintenance is performed efficiently and effectively. As the world’s largest dedicated offshore construction grouting company, FoundOcean brings these attributes of efficiency and effectiveness, along with our extensive expertise, to all our projects.

For more information on FoundOcean’s experience and capabilities, contact the team on +44 1506 440330 or email info@foundocean.com