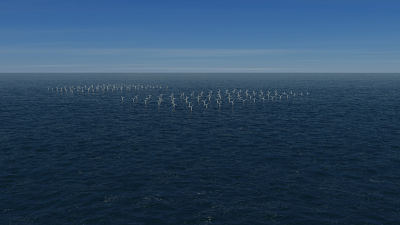 FoundOcean has successfully completed the grouting of foundations at Gemini Wind Farm on behalf of the main contractor, Van Oord.

The offshore wind farm, situated 85 kilometres north of the Dutch province of Groningen, is made up of 150 wind turbines spanning across 2 sites. The 600 MW wind farm will provide 785,000 homes with renewable energy from 2017 onwards.

Following the continued success of FoundOcean and BASF’s collaboration, the Gemini wind farm project was the first to utilise a new grouting material, MasterFlow 9800.

Van Oord, who led the installation of foundations for the Gemini project, chose MasterFlow 9800 for its unique qualities which enhance productivity and safety.

Having considered operational challenges, which are frequently encountered during offshore operations, it became clear that there was a significant market requirement for an alternative material. For large scale projects, such as Gemini, there was a need for engineered grouts that could be supplied in bulk rather than bags, and effectively mixed to ensure a consistent quality.

Jim Bell, the Managing Director of FoundOcean, highlights the necessity and effectiveness of the product.

‘“FoundOcean recognized a need amongst its customers for a material that could provide high early strength development and low temperature performance, yet also offered increased efficiency, safety and cleanliness”

The MasterFlow 9800 grout is delivered to the foundation at much higher rates than previously seen with blended materials, resulting in reduced impact on the vessel’s critical path. Alongside its low autogenous shrinkage and excellent early strength development, the material’s ability to be supplied in bulk improves safety and productivity by eliminating the offshore lifting of bags and containers.

MasterFlow 9800 enables the installation contractor community to reassess their procedures in offshore grouting and to consider a new way of working – one which delivers significant and quantifiable improvements in productivity and safety when grouting offshore structures.