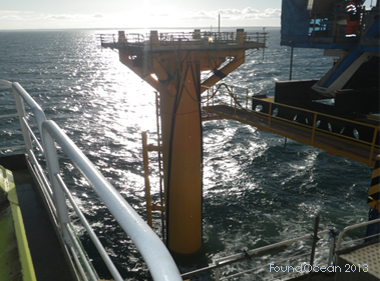 FoundOcean has completed the grouting contract for Narec’s Offshore Anemometry Hub (NOAH), under contract to SeaRoc.

The NOAH contract was a notable project in another very successful year for FoundOcean which included offshore operations in the United Arab Emirates, South East Asia, Australia, India, the Gulf of Mexico, and Europe, reconfirming their position as the world’s leading offshore structural grouting specialist.

Due to the makeup of the seabed on the NOAH project, the 60m high foundation design was not a typical tripod: it was designed to be secured using a rock socket grouted connection and a grouted pile sleeve connection at each of its legs. This meant that communication between FoundOcean and SeaRoc was essential to ensure the project was completed successfully within the tight project schedule.

After the jacket was placed and the 10m deep rock socket was drilled through the pile sleeve, FoundOcean mixed and pumped grout into the socket. Immediately following this, a 24m long pile was lowered through the sleeve into the grout-filled rock socket. The rock socket grout contained a special retarder to slow the curing rate, and ensure it did not set before the pile was inserted. The retarder was added via a metred dosing system built into the mixer. The remaining two rock socket connections followed the same procedure.

Once the rock socket connections were established, FoundOcean then injected ordinary Portland cement grout into the three annuli between the piles and the tripod sleeves via connectors above sea level.

The offshore operations were completed in 4 days. Toby Mead, Operations Director at SeaRoc led the project and commented that, “FoundOcean’s onshore support team and offshore personnel were professional, knowledgeable and clearly experts in their field.”