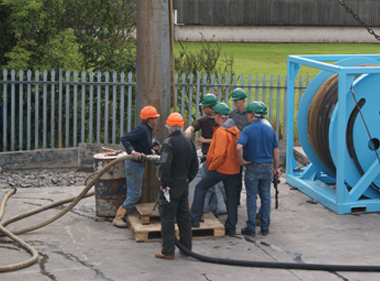 Peter joined FoundOcean in 1983 in its former guise of Wimpey Laboratories.  After several name changes for the company including an incarnation as Seamark Systems, Peter is retiring on 14th November 2010 after 27 years of sterling service to the company, its employees and the offshore grouting industry.

Peter joined FoundOcean in 1983 in its former guise of Wimpey Laboratories.  After several name changes for the company including an incarnation as Seamark Systems, Peter retired on 14th November 2010 after 27 years of sterling service to the company, its employees and the offshore grouting industry.

As Base Manager, Peter was responsible for keeping the day-to-day operations of the Livingston base running smoothly and effectively; he also played a key role in managing the grout trials for offshore projects. His other key focus was to ensure the plant was well maintained and kept in excellent working condition. As record management became increasingly important, Peter took this into his remit.

Peter has seen many transformations from his early days as a Site Mechanic to his current position as Base Manager in Livingston. The company is four times its original size and has moved its Offshore Service Base twice, most recently into new premises in Livingston. Peter oversaw the smooth transfer from our old cramped and sometimes dusty yard to the professional, well-appointed Livingston premises in 2007. This challenging move was made successful by him.

Prior to becoming our Base Manager in 2006 Peter had several appointments in the company including Offshore Fitter, Senior Fitter and Logistics Coordinator. One of his many roles was to assist in the running of our Peterhead base for many years and to see it move to Wimpey’s main Scottish base in Uphall, just west of Edinburgh.

During his time in our old base in Peterhead Peter played a major role in constructing some of our first in-house built Recirculating Jet Mixers (RJM), the flagship of our fleet of grouting mixers. This continued when he moved to Uphall and then Livingston with continued improvements including the change from diesel power to electric direct drive for the grout mixing pump.

Since 1983 Peter has undertaken a substantial number of offshore projects worldwide including platform pile and underbase grouting, pipeline stabilisation using fabric formworks and the installation of structural strengthening and repair schemes using reinforcing stress grouted clamps. His wealth of experience and knowledge gained on projects in The Gulf of Mexico, North Sea, Mediterranean and Far East has been invaluable to the rest of the offshore team.

Peter’s first offshore project following his transfer from the onshore geotechnical division was the Harvest jacket installation offshore California. He very soon fitted in with the offshore crew, and overcame several mechanical problems on this large and challenging project, immediately creating an impression with his enthusiasm and professional approach to his work.

One of his many offshore ventures was an arduous arsenic disposal project, filling damaged subsea chemical drums with grout using a small batch mixer and pump unit, into which the cement had to be loaded by hand. Peter undertook the loading, mixing and pumping together with Roddy McDonald on the other shift; no mean feat with over 100 tonnes of cement, which in those days came in 50kg bags.

Peter has many distinctive attributes including his full head of hair, occasionally commenting that he needed to get it cut so that his hard hat would fit.  Once during a long overseas assignment he put in an expense claim for a haircut, which he said was reasonable as his hair grew in company time.

Peter has worked alongside most of the senior management team, seeing them progress from fresh-faced Project Engineers to company Directors. His careful mentoring and wise insight over the years has helped to make the company the success it is. Peter’s character, experience and enthusiasm will leave a lasting impression and he will certainly be missed.

We wish Peter a fulfilling and adventurous retirement.