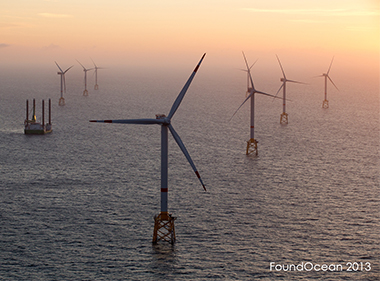 FoundOcean has been awarded the contract by Graham Construction to pile grout the foundation for the world’s largest offshore wind turbine, developed by Samsung Heavy Industries, in Fife, Scotland. This will be the first 7MW turbine to be installed. Each blade measures over 80m, longer than the wingspan of an Airbus A380, making them the longest ever installed to date. The project is part of the Fife Energy Park development.

Minister for Energy, Enterprise and Tourism Fergus Ewing said: “Increasingly, Scotland is recognised as a centre of expertise for the next generation of offshore wind energy technologies, and Fife can play a key role in developing knowledge and research in the energy sector.

“Not only will this development provide a much needed boost to our economy, but more than 500 jobs could be created in Fife through this £100m project to develop a new generation 7MW wind turbine.”

FoundOcean will complete the project in two phases using the Exagrout material Masterflow® 9500, from BASF: FoundOcean will firstly grout four piles into approximately 30m-deep pre-drilled rock sockets. The second stage involves grouting the annuli between the jacket’s stab in legs and piles, forming the connection.

A walkway is being constructed from the shore to the turbine foundation; FoundOcean will also grout this into place using conventional pile grouting techniques.

FoundOcean will be using its new Super Pan Mixer which has been proven to double the current output rate of all other high strength grout mixers on the market, allowing for faster project completion. All grout mixing will take place onshore with grout pumped directly to the jacket’s primary input 35m offshore.

Masterflow® 9500 has established itself as the high strength grout of choice for offshore wind projects thanks to its mechanical properties which have been engineered specifically for such applications. Couple this with its volume stability, and the installation advantage of its ability to be mixed and pumped at ambient temperatures as low as 0ºC, and it becomes clear why this new generation of material is making such an impact.

Grouting will take place in July 2013.