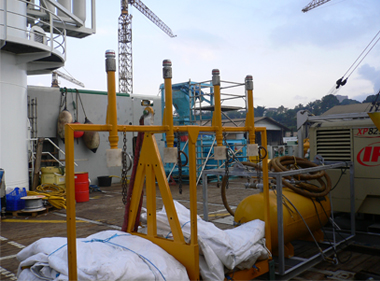 In January 2009, FoundOcean was contracted by Subsea 7 to provide fabric formwork supports to the 36-inch pipeline over the length of its landfall approach. The pipeline which required support, transports oil from several North Sea platforms near Shetland. The seabed is rocky, uneven and sloping and the original pipeline supports, installed years ago, had subsided.

FoundOcean’s expertise and experience in varying water depths made installing pipeline supports under the 4km stretch of pipeline a routine operation. The vessel’s crane lowered the bag deployment sled to the seabed close to the pipeline. At this point the cement hose was already connected to the grout bag. An ROV pulled the formwork from the deployment sled and positioned it under the pipeline, using the formwork’s integral deployment yoke.

FoundOcean’s team then mixed and pumped the cement grout into the formwork until it was filled sufficiently to support the pipeline. The ROV then disconnected the cement line from the support for recovery to the surface.

In all, the project lasted three weeks, including the installation of eight pipeline supports in the middle of the North Sea winter season.