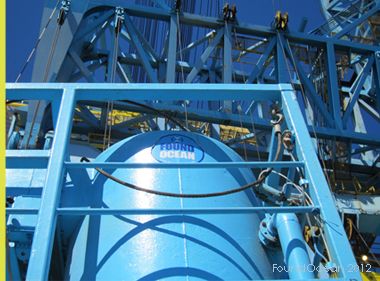 FoundOcean has won two North Sea pile grouting contracts for a total of five jacket structures, the installation of which are due to start in the first half of 2012. The contracts were awarded as FoundOcean and Saipem enter the second year of a three year agreement between the two companies. Operations will be carried out onboard Saipem’s S7000 heavy lift vessel.

Martin Hardy, Commercial and Technical Director at FoundOcean said, “This three year agreement confirms Saipem’s confidence in FoundOcean’s ability and expertise when it comes to offshore grouting. We completed four North Sea projects for Saipem during 2011, and look forward to continuing our successful alliance in the future.”

The first award consists of pile sleeve grouting for three jackets as part of planned extension works. Two jackets each have four legs and three pile sleeves per leg, and the third jacket is a four-legged steel structure with one pile sleeve per leg. The three-jacket project is located in the southern part of the Norwegian North Sea in water depths of between 70m and 80m. A 10-man crew will be mobilised to undertake the grouting operations.

The second award consists of two four-legged jackets: the first has two pile sleeves per leg, and the second has one pile sleeve per leg. The field is located in the UK sector of the Central North Sea at water depths of between 75m and 82m. A 10-man crew will also undertake the grouting operations.

For both projects, the connection between the pile and the sleeve will be made by injecting CEM1 Type 52.5N cement and seawater grout into the annuli. A conventional displacement grouting system has been designed for the jackets, with subsea primary, secondary and tertiary grout inlets to the sleeves. The grout lines on all five jackets incorporate FoundOcean Male ROV Subsea Grout Connectors.